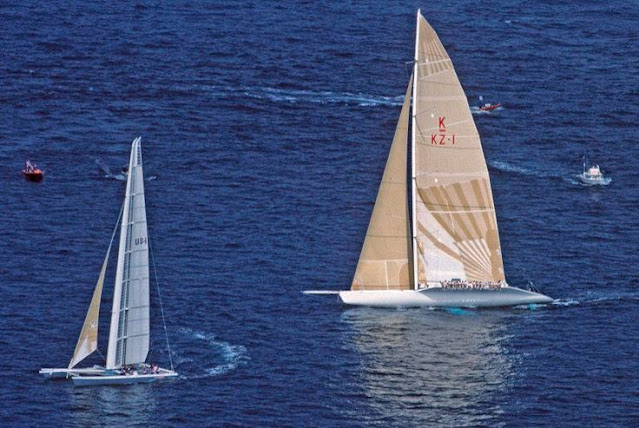 This a great video about the 1988 challenge for the Americas Cup via New Zealand. The Kiwi's built a boat they thought the Americans would not be able to challenge due to the lack of time the Americans had to build a competing boat, they were wrong as the Americans chose a catamaran with innovative wing sail that was easy to build in a short period of time. It was amazing how the Kiwis thought the cat was unfair when they tried to steal the cup with a boat they thought could not be challenged. Needless to say the Kiwis lost big time. They did go to court in 1989 to try and get the cup in which the judge agreed the cup should go to NZ, but then Team USA went back to court and the judge agree the Cup would stay in the USA. So NZ lost on the water and in court. Good news is the sailing world learned about the advantages of multihulls and wing sails.

The wing sail has been used since in two more Americas Cups but not in 2021, however the racing series SailGP is still using the wings with great success, allowing SailGP cats to reach 50 knots, no doubt 60 knots is in the foreseeable future.

A fun note is Hobie Cat was involved in the designing of the USA catamaran.

I should not the news videos are heavily biased toward the Kiwi's perspective due to the reports coming from NZ. Regardless its a fun bit of AC history.