It's a common description. 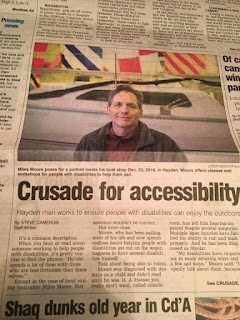 When you hear or read about someone working to help people with disabilities, it's pretty routine to find the phrase: “He/she spends a lot of time with those who are less fortunate than themselves.”

Except in the case of local sailing instructor Miles Moore, that sentence wouldn't be correct.

Moore, who has been sailing most of his life and now spends endless hours helping people with disabilities get out on the water, happens to have several disabilities himself.

Talk about being able to relate.

Moore was diagnosed with dyslexia as a child and didn't read until he was 14. A disease you really don't want, called otosclerosis, has left him hearing-impaired despite several surgeries. Multiple knee injuries have limited his ability to run and walk properly. And he has been diagnosed as bipolar.

“My disabilities have impacted me in many amazing ways and a few sad ways,” Moore said. “I openly talk about them, because it does no good to overcome things and keep it to yourself.

“Other people gain hope when they know or see others overcome disabilities and find balance.”

MOORE'S problems have been so severe that many people would have given up.

“When I got into college — which was a miracle — I had a fourth-grade reading level,” he said. “My wife (Corine) was my tutor so any academic success goes to her.”

Moore downplays his college achievements, but he has a degree in recreational therapy from the University of Idaho and a masters in vocational rehabilitation counseling.

That education, along with the fact that he grew up in the seaside town of Westport, Wash., — with his mom and dad working as sailing instructors and fish taxidermists — pretty much set the course for Moore's own professional and volunteering life.

Miles and Corine run a sailing equipment shop in Hayden called FunToSail.com, 406 W. Miles Ave., and he earns a living as an instructor — but Moore also puts in endless hours working to get anyone with a disability on the water.

“I soon will be producing trap seats that bolt onto either side of a Hobie 16,” Moore said. “These seats are made specifically for persons with disabilities.

“The trap seat was designed by Mike Strahle, a good friend of mine, who has a spinal cord injury. I will also start to produce Mike's adaptive sailing chair — called the Strahle Chair — that is used in keelboats and that I'm adapting for the Hobie Islands, a sailing kayak I use a lot for my programs as they are the most accessible sailboats on the planet.”

BESIDES working with individuals and groups of future disabled sailors, Moore is conducting a personal battle to make sure there are proper facilities available for anyone who wants to get out on a boat — or even use a local beach.

To that end, he runs a program called Access to Outdoors (www.accesstooutdoors.com), a nonprofit that aims to improve access for everyone.

“They would say: ‘Miles, I appreciate what you're doing, but there are no accessible launches.'

“When a person gets into a car accident and suffers a spinal cord injury, for example, then goes through a fabulous rehab program to teach them to ski, handcycle, boat, etc., it's discouraging when they go home and find there are no programs or no access to the outdoors for what they've learned to do.

“Thus, my work with ATO has become very important.”

MOORE insists that, occasionally, the problems with accessibility (including the Coeur d'Alene and Spokane areas) can be downright silly.

“I've gone to assess sites,” he said, “and had engineers tell me they followed all the ADA (Americans with Disabilities Act) legal measurement requirements. I tell them that's fine, but accessibility goes beyond measurements.

“For example, through a friend with a spinal cord injury I found a restroom that fit all the ADA measurements — but unfortunately there were big rocks around the restroom to protect it from vandalism. The rocks were so close together, it kept people in wheelchairs from getting to the restroom.

“I did get that one fixed by having one of the rocks moved just 12 inches over to create a 48-inch opening.

“Most of the boat launches in this area have real issues with slope. They're just too steep. Others have barriers to their accessible features.

“I actually have had people ask me: ‘If our site is made accessible, will people with disabilities really use the site?' To which I say: ‘If you build it, they will come.'

“There simply is a segment of our population with disabilities that just know that so little is accessible, they just stay home. That's what we're trying to change through ATO.

“The Forest Service in Boundary County did a lot with us last year, and we hope to make at least one site fully accessible. Also, I just met with the Bureau of Land Management to make a new accessible site at the Blackwell Island facility.

“The Blackwell Island site is by far the most accessible in Kootenai County, and I mean by far.”

MOORE is disappointed the city of Coeur d'Alene did not approve the 10th Street Non-Motorized Launch — he suggests some powerful people simply didn't want it in their backyard — but he has no intention of giving up on any project.

He's even willing to praise some areas that are not fully accessible.

“The Honeysuckle launch (at Hayden Lake) doesn't give persons with wheelchairs direct access to the water, but when it comes to boating, it does really well in facilitating a person getting to his boat.”

Moore intends to remain relentless in this crusade for accessibility — and for a very simple reason that he states as a question.

“Why shouldn't someone with a disability enjoy the same accessibility to boating or anything else that other people get to do?”

To Moore, the answer to that is pretty obvious.
Posted by funtosail at 3:58 PM